Taxis around the world

If you’ve ever travelled in a taxi abroad you’ll know that you do things very differently. Even as a taxi driver, those stark differences can take you by surprise and make you wonder how half the cabbies manage to get taxi insurance.

However, it’s important to remember that taxis are designed to be suited to their respective climates, cities and economies. Just as London's iconic black cabs are the perfect vehicle for the capital’s roads, a rickshaw makes complete sense for the often chaotic streets in India where road space is at a premium.

Anyway, without such a variation in the different taxis around the globe, you could argue that the world would be a much duller place.

Taxis are not only a practical means of getting from A to B – they are a tourist attraction in their own right for travellers who want to get an authentic travel experience while on holiday.

So, where shall we start our taxi journey around the world? Let’s kick things off by taking a closer look at Old Blighty…

We’ve already mentioned our very own black cab – but let’s take a look at it in closer detail.

The iconic black London taxi has lots of competition today – not least from Uber – but it’s still the omnipresent vehicle on the capital’s roads. Today, you’ll see around 21,000 black cabs in London, licensed by the Public Carriage Office.

The reason that they are black is very simple – because that was the standard factory colour, so they were cheaper! Sometimes today you will see a London cab that has been given a colourful paint job, often as a way of advertising a brand. But it’s just not the same. At least, we don’t think so.

Did you know? Adverts first appeared on London taxis in 1928 but were scrapped a few years later after the bus companies complained it was denting their advertising revenue. However, the adverts returned in 1982, after a Royal Parks Act was amended to enable the carrying of advertising through the parks. 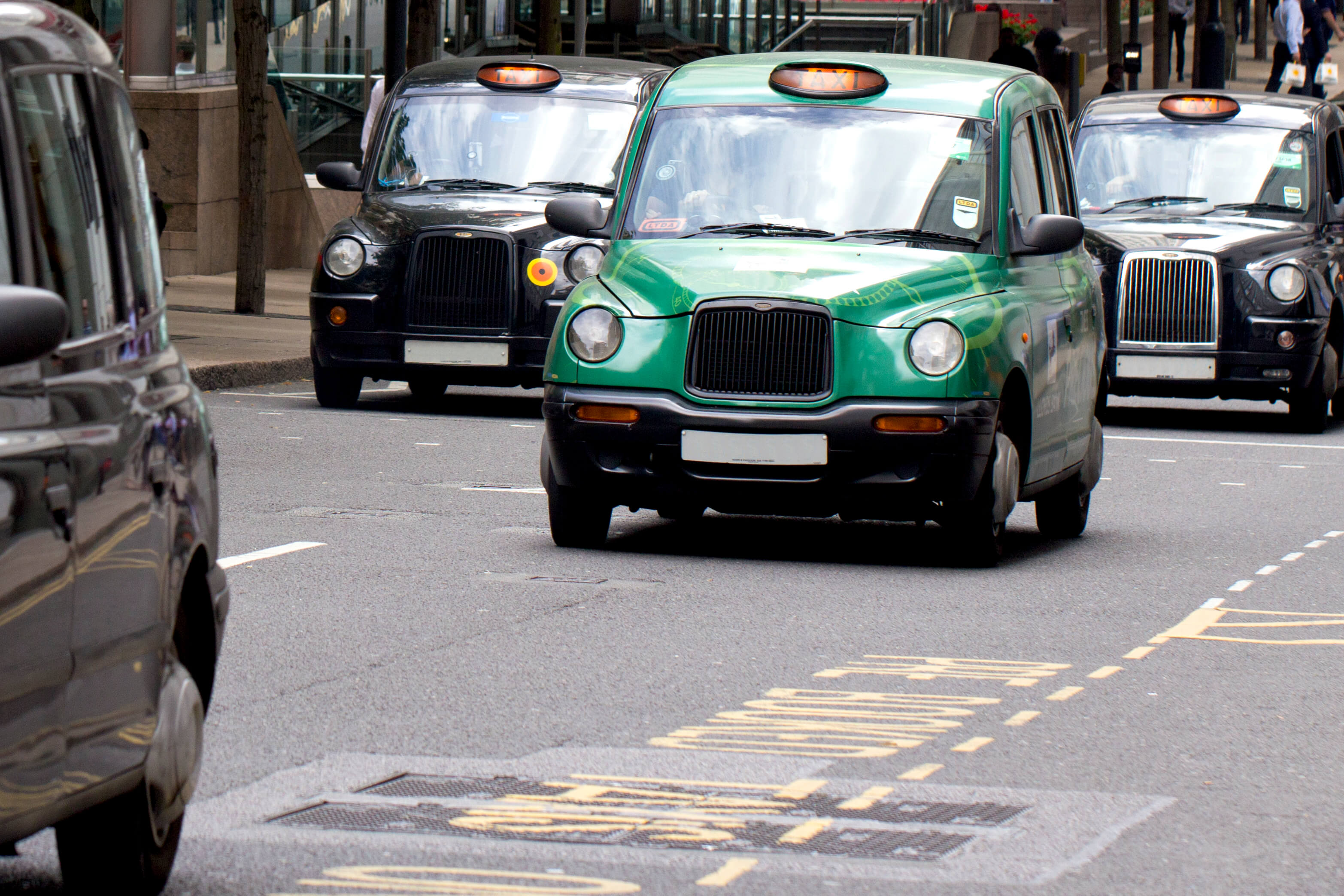 Over the Atlantic we go, to the Big Apple where the equally iconic New York City yellow cabs dominate the streets.

Indeed, it’s not only London that has a tendency to keep its taxis the same colour. It was decided in 1967 that all NYC cabs should be painted yellow so they would easily stand out from unofficial vehicles.

But who made the decision that yellow was the optimum colour? That goes back a bit further to 1908, when Albert Rockwell went travelling with his wife Nettie. As they travelled throughout Europe, they noticed the prominent role played by taxi transportation. Upon returning home, Albert decided to start his own company and went with his wife’s suggestion to paint the fleet yellow.

Albert liked the colour so much he created the identity of his company around it – as the Yellow Taxicab Company – and even tried (unsuccessfully) to trademark the colour yellow to stop competitors copying them.

As of 2018, India has about 1.5 million battery-powered, three-wheeled rickshaws on its roads. Around 11,000 new ones get released every month.

For tourists visiting the country, they provide not only the most authentic travelling experience, they are also the cheapest form of transportation – but you’ve got to be prepared to barter.

It can feel strange to negotiate a price before getting in a taxi – in the UK we’re so used to taxi meters calculating the cost for us – but it’s often well worth your while.

Taxi drivers automatically state a higher price to tourists than they do locals, knowing that some nationalities are not so used to bartering. However, as long as you’re firm and polite, you can quickly see that initial price tumble. If it doesn’t come down as much as you want it to, you can just walk away.

As a taxi driver in the UK, can you imagine what it would be like to have to negotiate a price before every journey? Put it this way, you’d rather not. 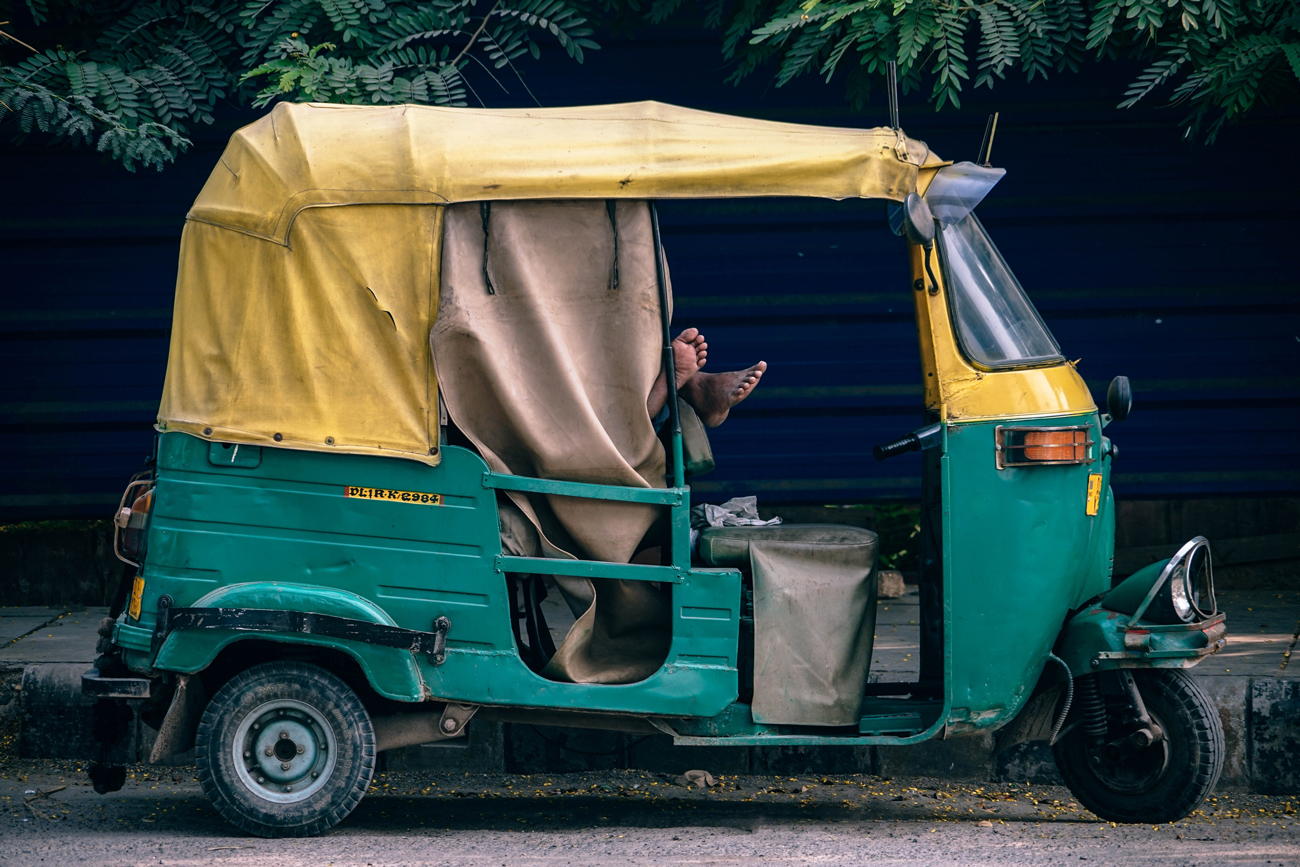 If you know your taxi history, you’ll know how big a part Germany played in the taxi industry.

If you don’t, let us fill you in. The taxi meter was invented by Friedrich Wilhelm Gustav Bruhn in Germany in 1891. Six years after its invention, German engineer, industrial designer and industrialist Gottlieb Daimler was the first person to build a meter-equipped (and gasoline-powered) taxicab, called the ‘Daimler Victoria’. The Daimler taxi was then delivered to a man named Friedrich Greiner, a German entrepreneur who started the world’s first motorised taxi company.

Daimler’s company – which registered ‘Mercedes’ as a trademark in 1901 – went on to merge with Karl Benz’s company to become Daimler-Benz in 1926 – the company that we have eventually come to know as Mercedes-Benz today.

So, it’s perhaps no surprise that today the taxi fleet in most German cities – Munich, in particular – is made up of Mercedes-Benz, Audi and BMW cars. It sure makes for a smooth and comfortable ride.

The law decreed that Germany’s taxicabs should be beige in colour, or Elfenbein, a light ivory shade since 1971. In 2005, this legal restriction was lifted, but most taxi firms are still happy to go with the traditional look.

If there’s one thing everyone knows about Venice it’s that most of the streets are made up of canals. What this means for getting about the city is that there’s a good chance you’ll need to take a water taxi at some point.

While they can be expensive – due, in large part, to the increased number of passengers they can carry – they’re the best choice if you are in a hurry or if you are carrying luggage.

Your other option is to take the Vaporetto, a passenger ship which is similar to a bus in other places – however, you might have a wait to board one as they can get extremely busy.

If you want to reduce the price of a water taxi, your best option is to pack in as many people as possible and split the cost accordingly. Anyway, if you’re in Venice, surely it’s about travelling in style? Wooden water taxis, with their plush leather, open-air seating and private drivers, provide you with unique views of the city.

The only thing to be cautious of is unlicensed water taxis. The taxi trade in Venice can be quite lucrative, so you need to be careful of unlicensed taxi drivers trying to charge you over the odds. To avoid this, only get in a water taxi with a yellow stripe, which indicates they have a taxi licence. 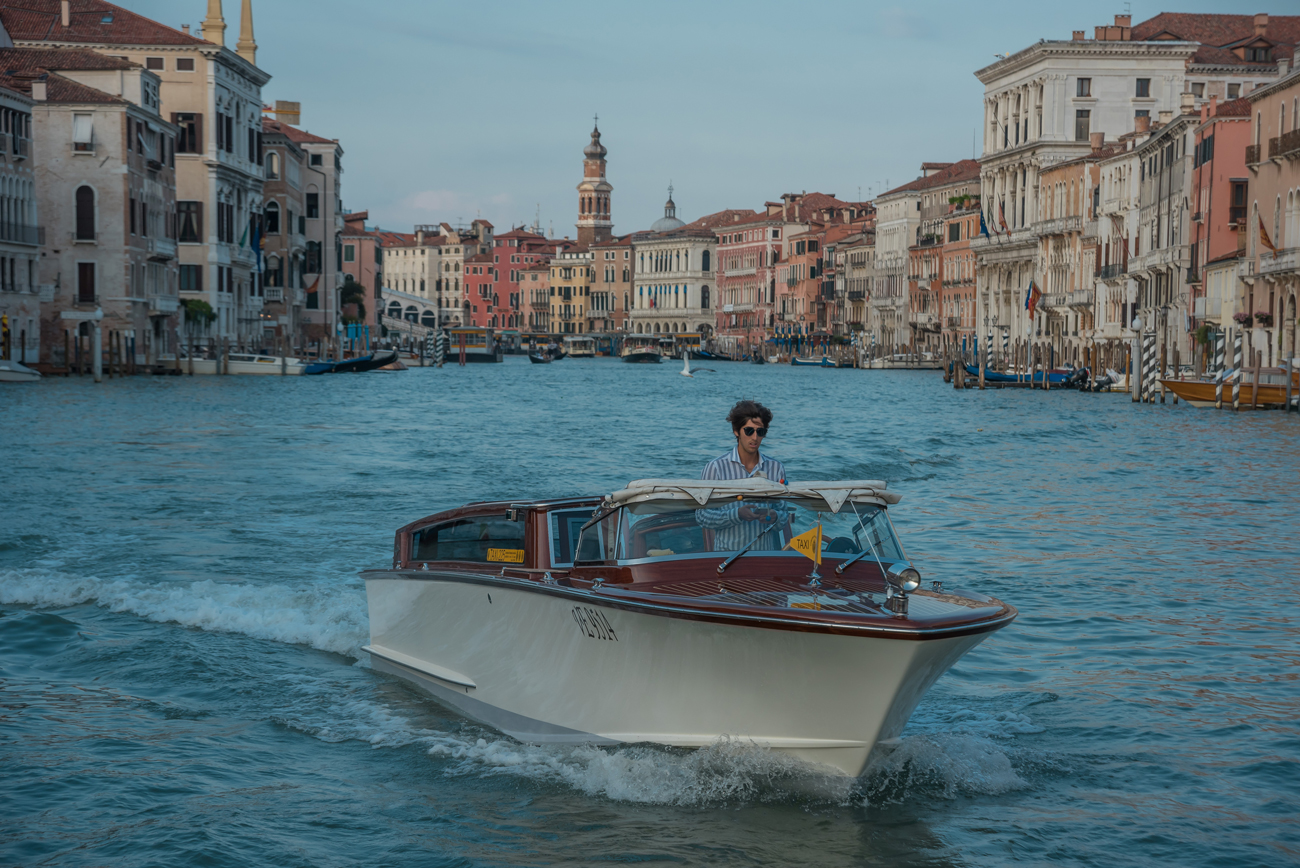 If you’ve travelled around Africa, you’ll be familiar with the concept of bush taxi – or ‘taxi brousse’ as it’s known locally in Madagascar.

Taxi brousses connect the provinces to the centre (Tana), the capital of Madagascar. These minibuses – if you can call them that – are packed to the rafters with people and luggage, meaning journeys are often long and uncomfortable.

On the upside, they are fairly cheap – certainly as a Western tourist – so while you have little or no legroom, you’ll have some money to spend once you reach your destination.

It’s also a fantastic opportunity to mix with the locals and play games with the kids – maybe even try a bit of local produce. However, as a taxi driver who’s used to their own space in the driver’s seat of the car, it sure takes a bit of getting used to.

If you’ve ever been to Hong Kong, you’ll know that taxis come in three colours – red, green and blue – each serving different territories. However, it is the red taxis which are the most familiar, largely due to the fact they serve the urban areas where tourists spend most of their time sightseeing.

Unlike London and NYC, however, there isn’t an explanation behind why the taxis are coloured as they are. They just are.

With more than 18,000 cruising the streets of the territory, that makes Hong Kong one of the most taxi-dense cities in the world, with around one taxi for every 400 residents. In contrast, New York has one taxi for every 600 people. As a result, it’s often easy to find a taxi to flag down.

Unlike other cities that have diversified their taxi fleet over the years, more than 99% of all taxis in Hong Kong are Toyota Crown Comforts; a model of car made exclusively for taxi use.

Taxis in Hong Kong are all metered and are usually pretty comfortable for passengers thanks to their air conditioning and super-clean interiors. And what’s more, Hong Kong taxi drivers are known for being incredibly honest, working under a government that is known for coming down hard on scammers.

Lying just south of Naples in Italy off the coast of Sorrento, the island of Capri is famed for its cliff-side lemon groves and chic boutiques. In keeping with this stylish vibe, the taxi fleet in Capri consists of convertible cabs.

Although taxis aren’t the cheapest way to get about the island, it’s not every day that you visit a place as chic as this so why not splash out?

The taxi industry in Columbia is a little complicated. Using a ride-hailing app to book a car is illegal in the country. But that didn’t stop Uber from trying to break into the market.

However, as of 31st January 2020, Uber has ceased operating in Columbia following drivers having their cars seized and licences taken away.

The US tech giant has around two million active users in the country, and roughly 88,000 drivers, but was forced to retreat after the head of the Industry and Commerce department, which regulates the market, said that the company was guilty of "unfair competition" and a "significant advantage" over older and more traditional taxi services.

Although Uber’s exit means less competition and potentially fewer drivers, Columbia has a well-established and impressive fleet of Korean-made yellow taxis that are a safe, reliable and relatively inexpensive way of getting around.

The car of choice for most Columbian cabbies is the Hyundai EON due to its fuel economy and size.

One of the unofficial national symbols of Thailand, the tuk-tuk, has grown in popularity among both Thai nationals and tourists alike as a means of getting around the country.

Much like the auto rickshaws in India, Thailand’s tuk-tuks have three wheels and are open-air vehicles that can hold two to three people at a time. However, they come in all shapes and sizes.

Again, to get the best deal on a tuk-tuk taxi, you will need to haggle with the driver – in Thailand, tuk-tuk drivers have a reputation for driving up the prices for tourists.

Your best bet for a reasonably priced tuk-tuk is to head outside of the main tourist areas, and to haggle alone – if the driver sees that you are in a group, they might try to charge you per person.

While not always cheap, tuk-tuks are a fun way to see cities such as Bangkok. However, if you need to travel beyond a couple of miles, you’re best off jumping in a standard taxi. 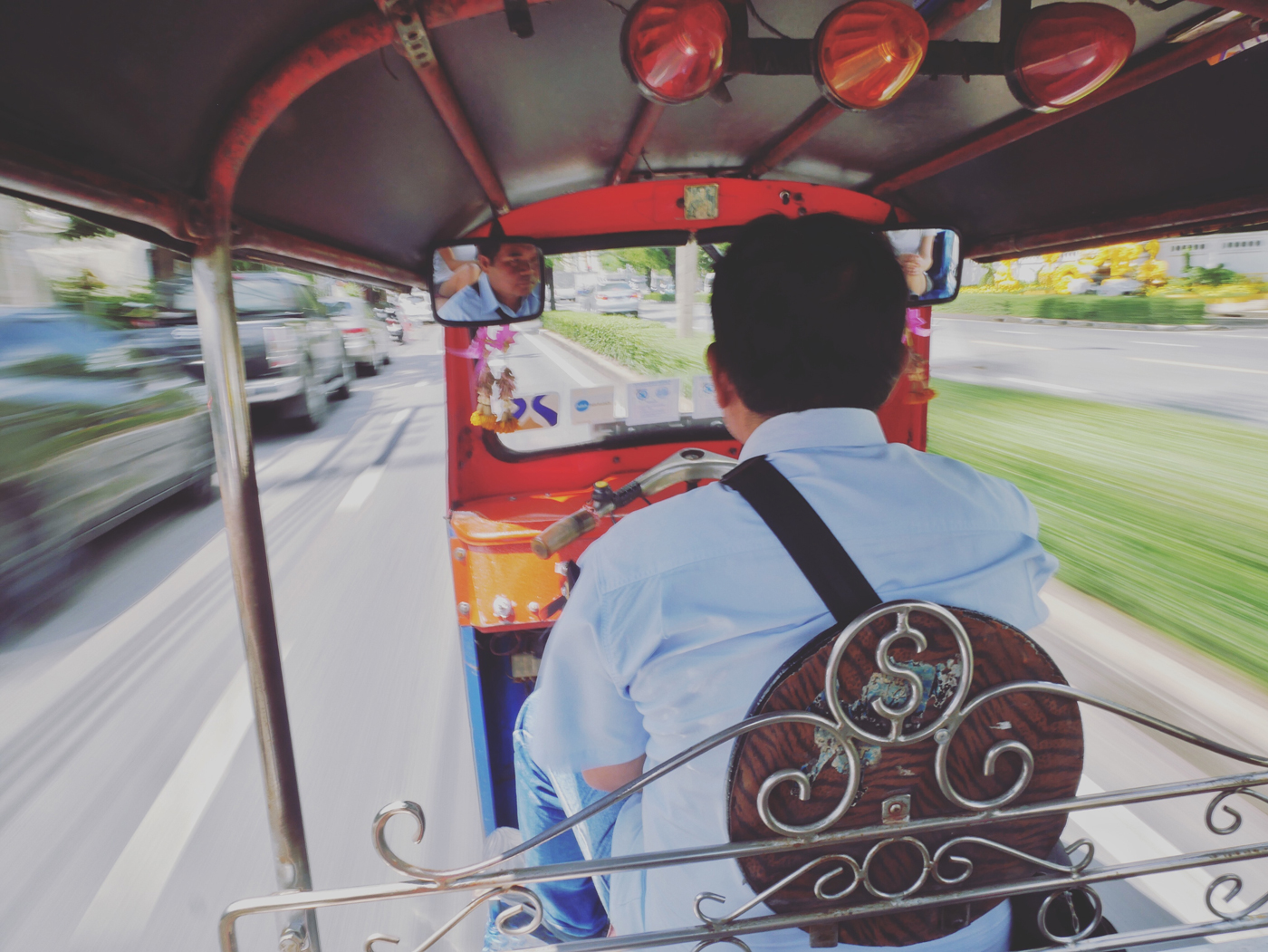 To drive a taxi in the UK, you’ll need to take out specialist taxi insurance to meet your legal obligations as a road user as ordinary car insurance won’t be valid.

Protect your taxi and get a quote today.