Is there actually a flying taxi? What do we know about it?

Flying cars were once the stuff of science fiction movies. But now, it seems our society is edging ever closer to a futuristic state. The future is now, as they say!

The latest is news of the launch of a flying taxi, which will transport paying passengers from rooftop to rooftop, dodging traffic back on the ground. But it’s worth pointing out, this ‘flying taxi’ isn’t your average London black cab or car with airborne capabilities! It will actually be helicopter-like in appearance, and will take off and land from designated landing pads.

So, as a driver of a standard taxi, should you be worried? Will flying taxis become your nemesis? Will your loyal customers start shunning you and take to the skies instead?

Uber Air to trial in Melbourne – what do we know? 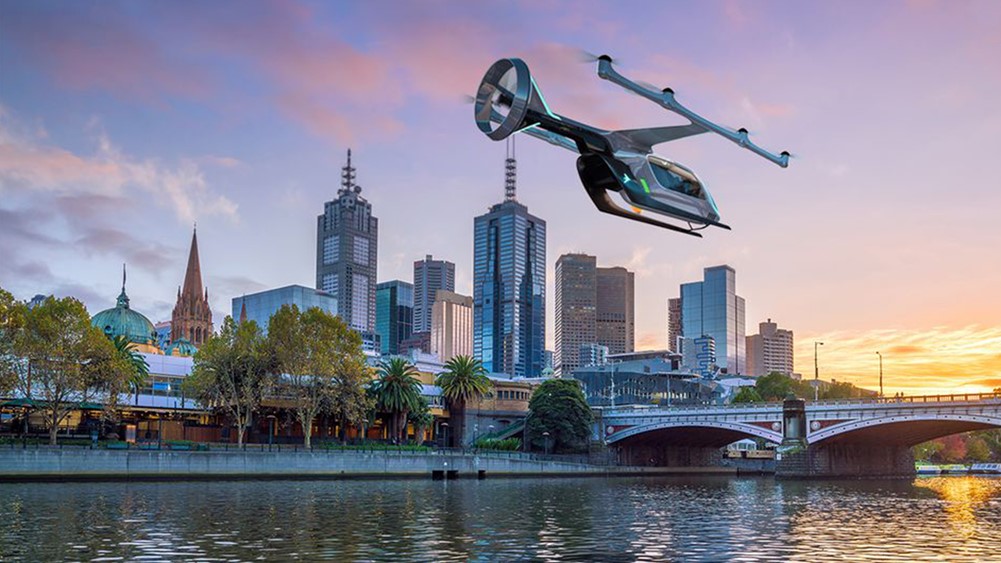 Reporting on the news, the Guardian writes that Melbourne has been chosen by Uber to be first city outside of the US to host trials of Uber Air.

Uber has described the service as “aerial ridesharing”, which will transport people between rooftops for the price of an UberX. It’s suggested that trial flights will kick off in 2020, with commercial operations expected three years later.

Uber Air will be available through the Uber app, and the network of landing pads will be known as ‘Skyports.’

Eric Allison, a spokesperson for Uber, said that Uber Air could potentially help to cut congestion in Australia, which costs the country around $16.5bn a year.

“The 19km journey from the CBD to Melbourne airport can take anywhere from 25 minutes to around an hour by car in peak hour, but with Uber Air this will take around 10 minutes,” Allison said.

Matthew Marino, an aerospace engineer from RMIT University, believes that flying taxis could potentially be safer than driverless cars.

“While a driverless car would be faced with obstacles on the road like pedestrians on their mobile phones or other vehicles like trams and buses, aerial autonomous vehicles don’t have these obstructions.”

Marino said that more research and development is needed to prove to people that the technology can be as safe as helicopters, which often fly around cities.

Chris De Gruyter, from the Centre for Urban Research, is a little more sceptical about flying taxis solving transport woes.

He said: “These vehicles are very low capacity – similar to what a car could carry – while there are also questions about [whether] these vehicles will create visual clutter in the sky and how environmentally friendly they are.”

He also said that empty running is another risk, where the air taxi would fly without passengers on the way to pick people up.

Uber may be stealing the headlines, but a number of other companies are also busy exploring the potential of flying taxis.

Boeing, for example, is currently creating a flying taxi – technically known as an ‘autonomous electric vertical take-off and landing (eVTOL) vehicle. As the Institute of Mechanical Engineers reports, Boeing has sought to secure future ‘urban air mobility’ by investing in Robotic Skies, a company that provides a global network of repair centres for drones.

“With safety as a cornerstone, we are shaping a robust operational ecosystem for on-demand mobility that supports the future of aircraft, air vehicles and autonomous systems,” Boeing HorizonX Ventures’ managing director, Brian Schettler said.

German-based start-up Lilium is also in the race. It claims to have created the world’s first all-electric, five-seater jet, which it plans to use as an air taxi service from as early as 2025.

In Britain, Vertical Aerospace built and flew the UK’s first electric vertical take-off and landing aircraft last year. The Bristol-based company, founded in 2016, hopes its concept will become a reality in just a few years’ time.

Vertical Aerospace’s aircraft features four propellers at the front and back, and has a body shaped like a helicopter. At the moment, it’s capable of a five-minute flight time, reaching a top speed of 80 kmph.

Also in Britain, Rolls-Royce announced last year that it had developed a propulsion system for a flying taxi. In its plans, the company stated that the eVTOL vehicle could potentially travel at speeds of 250mph for around 500 miles.

Will there be new aviation laws?

Of course, with air taxis taking to our skies, it raises some questions around aviation laws and legislation. We only need to think about recent news of drones causing disruption to airports to know the impact unregulated flights can have.

Uber’s Eric Allison, however, believes that Uber Air should be permitted to operate under existing aviation regulations. As Smart Cities Dive reports, Allison addressed current US aviation laws, saying that the Federal Aviation Administration (FAA) and other regulators wouldn’t need to change the current legislation, but instead interpret them to enable innovative technologies to succeed.

What’s next for flying taxis?

While the flying taxi concept is closer to becoming a reality, with confirmed trials in cities around the world, taxi drivers shouldn’t be looking for a new job just yet!

It’s still very much at its early stages. Trials still need to take place, and even if they prove successful, it will be years before flying taxis are rolled out on a much larger scale. We can confidently say that, no matter how many flying taxis are in our skies in years to come, there will always be a need for taxis back on the ground!

If you run a taxi business consisting of a number of (ground-based) cabs, you could save time and money by insuring them under one policy. Taxi Insurer can compare taxi fleet insurance from top providers on your behalf, helping you to find a suitable policy for a great price. Interested? Get a quote today!